While jet lag is extremely common, it’s also fairly simple to prevent, given you take the right precautions. Keep reading to learn how to recognize when you have jet lag, how to avoid it, and how to recover if you do end up feeling it.

What Is Jet Lag?

Circadian rhythm is the body’s 24 hour cyclical regulation of wake and sleep which relies heavily on external environmental stimuli; light exposure in particular. The circadian rhythm works in collaboration with the body’s homeostatic sleep debt process to create a regular sleeping schedule. The body’s homeostatic sleep debt process refers to the cyclical drive to sleep following periods of wakefulness; meaning the longer someone is awake the drive or “pressure” to sleep begins to increase until it has reached a maximum peak. Once sleep is obtained, the drive decreases allowing the cycle begin again upon waking.

The role of light is vital to sleep regulation in the brain. The level of light indicates to the brain whether or not it is time to be alert and high functioning or whether it is time to begin relaxing and preparing for sleep. Light exposure determines when the brain initiates melatonin production. 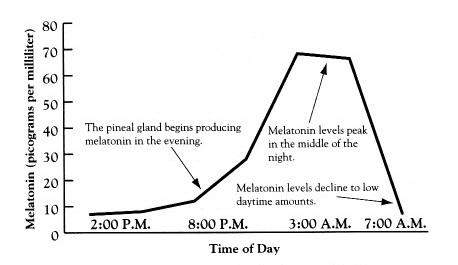 Melatonin is a hormone produced in the brain responsible for the gradual descent from full wakefulness to drowsiness, to sleep.  Following the extrinsic factor of daylight, melatonin steadily begins to increase in the evening as daylight begins to wane, peaks at night during sleep and is lowest in the morning and during the day.

The importance of light exposure can be seen in those experiencing seasonal affective disorder or seasonal depression.  Common in regions where sunlight is decreased during particular seasons like winter, seasonal depression can result in decreased energy, lethargy and hypersomnia or excessive sleeping.  Due to the lack of sunlight, there is an overproduction of melatonin resulting in an increase in sleepiness.

Therefore, when traveling far distances, the amount of light exposure received by your brain can be altered depending on location.  Such changes can create discord within the circadian rhythm of the body; losing light sooner in the evening by traveling east or far north or losing light later than the body is used to by traveling west or south can disrupt natural sleeping patterns.

What Is Social Jet Lag?

Social jet lag, though different than standard jet lag, can occur with or without travelling. Social jet lag refers to the misalignment of a person’s own biological time and that of traditional social time, time spent at school or work or out in public.

People affected by advanced sleep-wake phase disorder (ASWPD) or delayed sleep-wake phase disorder (DSWPD) have sleep-wake cycles that are out of sync or offset from normal, conventional sleep-wake cycles. The circadian rhythm does not match with common social constraints and leaves people with ASWPD or DSWPD feeling mismatched within the social world around them. The results include a sensation similar to that of standard jet lag; difficulty being alert, sleepiness or trouble focusing.

Social jet lag can also refer to sleep timing discrepancies that may occur between work days and free days. Different sleeping patterns on the weekends or on days away from work can negatively impact sleeping patterns that occur during the work week.

For example, if someone typically goes to bed at 10pm and awakens at 6am during the work week, but then on Friday does not go to bed until 1am and then sleeps until 9am or later, the internal shift that occurs creates a similar sensation to that of someone experiencing traditional jet lag.  Trying to return to a 10pm bedtime on Sunday may be difficult due to the differences in the timing of sleeping patterns during the weekend hours or days off from work.

About a third of people experience jet lag to a minimal extent, while another third experience more extreme symptoms. Common symptoms of jet lag include:

Jet lag can also be made worse by the airplane itself. Airplanes tend to have poorer air quality, lower humidity, and cramped conditions. Lower humidity results in dehydration, while being forced to sit still for a long flight makes the body achy.

Who’s at Risk for Jet Lag?

Morning larks, or those who consider themselves “morning people” and do not have difficulty waking early in the morning are more affected that those who consider themselves night owls.  Night owls typically enjoy staying up later and do not have an easy time awakening early in the morning. Adults over the age of 50 are at greatest risk.

People who travel frequently, such as flight crews and business travelers, are most at risk for jet lag, since they are constantly in different time zones and therefore their body has trouble settling into a steady circadian rhythm.

People with pre-existing sleep issues or stress also tend experience stronger symptoms, as well as anyone who overindulges in caffeine or alcohol.

How Long Does Jet Lag Last?

These symptoms usually last for several days until the traveler adapts to the new time zone. A good rule of thumb is that it takes about a day per time zone traveled to recover.

Senior citizens generally need longer to recover from jet lag. Their circadian cycles are slower to adjust to the new time zone.

If you travel somewhere with a higher altitude, expect that to lengthen your recovery time, too. It can take as long as 3 weeks for your body to fully adjust, thanks to the lower oxygen levels at altitudes of 13,200 feet or more.

How to Reduce the Effects of Jet Lag

Since jet lag cannot be avoided or prevented entirely, there are multiple ways to minimize the symptoms and help your body adjust accordingly upon arriving in the new time zone. Jet lag is a temporary experience and will resolve within 2-3 days of arriving within the new time zone. The number of days to recover or adapt equals the number of time zones that were crossed.

Additional methods to consider when trying to adjust to a new time zone include:

Take a look at Tuck’s informational guides on getting to bed while you’re traveling:

Be sure to consider the products below as key tools in your suitcase for great sleep: